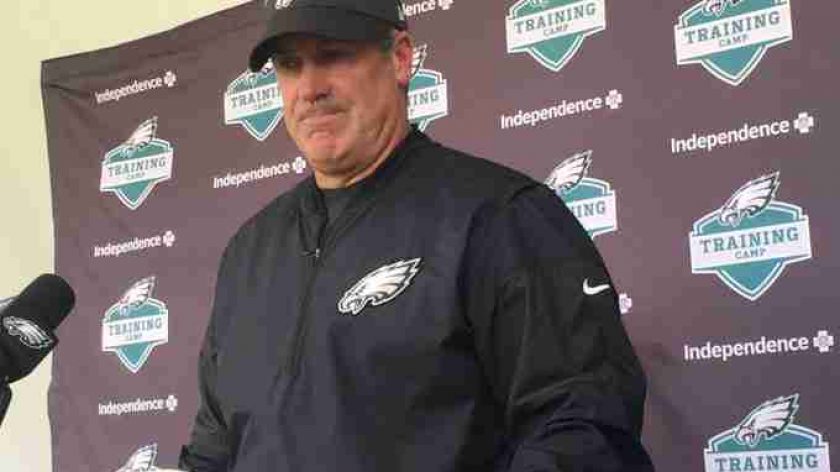 PHILADELPHIA – Andy Reid got a standing ovation, so why not Doug Pederson?

The only Super Bowl-winning coach in Eagles history is returning to Philadelphia on Sunday as the new mentor of the Jacksonville Jaguars and Pederson admits he’s not quite sure what to expect.

Pederson, though, did remember coming back as the quarterbacks coach on Andy Reid’s staff in Kansas City when Reid made his return to the City of Brotherly Love for the first time with another team and received a standing ovation.

“Hopefully it’s in that realm,” Pederson said on a Zoom conference call with Philadelphia-area reporters. “But look, it’s Philly, anything’s possible with these fans. I’m just looking forward to running out of that tunnel with the Jaguars and getting ready to play a game.”

The Eagles come into Sunday’s game at 3-0 and have looked like the most dominant team in the NFL under Pederson’s successor, Nick Siriani while Pederson’s Jags have also looked good at 2-1 after outscoring their last two opponents by a margin of 62-10.

Pederson did day there are no remaining hard feelings after being jettisoned by Eagles owner Jeffrey Lurie only three years after a Super Bowl LII victory. The breaking point was the coach insisting on autonomy when it came to certain assistant coaches, including Press Taylor, Pederson’s offensive coordinator in Jacksonville.

“That was a long time ago, two years ago,” Pederson said of his dismissal. “I have to get my team prepared and I’m personally looking forward to coming back to Philly. Obviously have a lot of fond memories there and what we did in 2017 is something that we’ll always remember. I’m excited about that. We have a few days here so still have to get the team prepared and ready to go.”

The statue, memorializing the most famous play in Eagles history, “The Philly Special,” still sits outside Lincoln Financial Field, with Nick Foles and Pederson representing the iconic moment.

Pederson told Jacksonville reporters earlier in the week he had never actually seen the statue in person.

Both sides seem happy post-divorce with the Eagles regaining their mojo under Sirianni thanks to the development of Jalen Hurts, who spent his rookie season under Pederson.

“Nothing surprises me with Jalen, just knowing the type of person he is and when the Eagles drafted him back in 2020, everything that you’re seeing now is everything that we saw in him when we drafted him,” Pederson said. “He’s just, number one, a tremendous person. There’s stability around him now with the coaching staff’s second year in the system.

“You’re seeing the growth not only in the quarterback but also in the team with some of the pieces around him. He’s going to defy all odds, that’s just the way his career’s been built. He’s overcome adversity everywhere he’s been at Alabama, Oklahoma. Not surprised. Not surprised he’s playing this week. He’s really utilizing the guys around him to help him get these wins they’re piling up.”

Pederson, meanwhile, looks more relaxed after trading the obsession of Philadelphia for the laid-back nature of the First Coast of Florida.

“It definitely feels good to be back on the sideline, to be in the locker room with these guys,” he said. “Obviously, the year off, that journey for me and my brother (died) and my family situation with him. It just was a really good time for me to step away and refocus and regroup myself, and come back with a lot of energy and passion, and just pour everything I learned in five years into this job and make it the best I could.

“Have fun with it. I think that’s one of the things I learned the first time, just have a little more fun with what we do, and don’t be so stressed out all the time.”

Pederson ultimately has no regrets when looking back at his stint as the Eagles coach.

“Just a fresh start for everybody, but I appreciate my time there, and (Eagles owner) Mr. (Jeffrey) Lurie hired me to win a championship, and we were able to do that for him and the city,” said Pederson. “And that’ll always be remembered.”