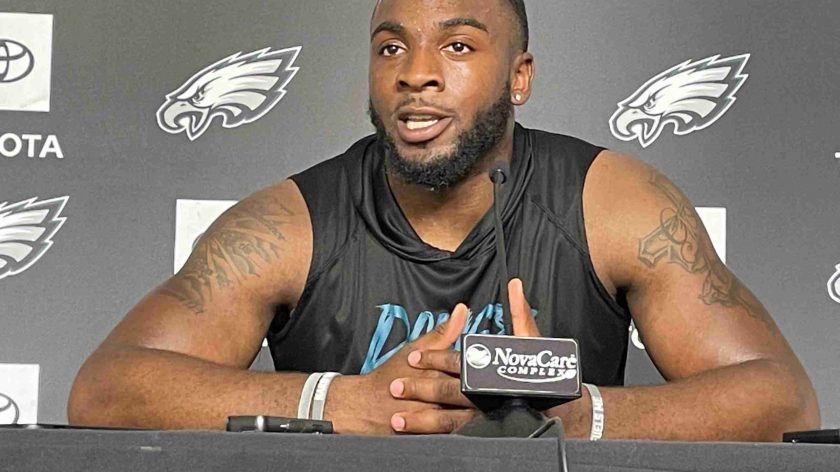 PHILADELPHIA – The hype is real when it comes to Nakobe Dean.

Starved for a difference-maker at linebacker, many Eagles fans have completely bought into the theory that the organization got a first-round talent at No. 83 overall after being told for months the reigning Butkus Award winner and national champion at Georgia was either the best second-level defender in the 2022 draft class or close behind in a photo finish to Utah’s Devin Lloyd.

NFL teams, of course, thought otherwise and Dean fell down the board before the Eagles finally pounced in the third round.

The issue was health and while many focused on a pec injury that some doctors believed might require surgery, that’s short-teem even in the worst-case scenario. The bigger issue for most medical staffs that flagged Dean was potential degenerative issues with his shoulder and knee, an NFL source told JAKIB Sports.

The Eagles’ medical staff was fine with any potential issue to the point that the team strongly considered Dean at No. 51 overall and may have jumped right there had Cam Jurgens, an organizational favorite, come off the board earlier.

The upside to Dean is most definitely real but anyone who thought he would arrive at the NovaCare Complex with a pre-determined fate like his college teammate and No. 13 overall pick Jordan Davis, got a bit of an eye-opener at the Eagles’ on-field OTAs when Dean started with the third-team defense with the obvious message of ‘Rook, you have to work your way up.’

Dean might even be the odds-on favorite to do exactly that this summer but Jonathan Gannon defaulted to veterans T.J. Edwards and Kyzer White, an offseason free-agent pickup from the LA Chargers, in 7-on-7 passing drills followed by Davion Taylor and Christian Elliss before Dean finally got to run with JaCoby Stevens as his complement.

When Gannon unveiled some of his hybrid looks with “overhang players” like Derek Barnett, Tarron Jackson, and Patrick Johnson dropping into coverage they were also mixing in with Taylor, who also got the occasional first-team rep next to Edwards or White as well.

Taylor, himself a third-round pick in 2020 at No. 101 overall, has been a bit of a forgotten part of the LB equation after signs of improvement last season were derailed by a season-ending knee injury.

The third-year player was actually hopeful of returning for the playoffs against Tampa Bay but was ultimately shut down with the intent of being ready for OTAs and Taylor now sees a silver lining to that.

“I feel like my injury, it was a setback, but it helped me hone in on my fundamentals,” said Taylor.

Taylor and White teamed for one of the defensive highlights of spring work when the latter blanketed undrafted receiver Britain Covey, resulting in a deflected Gardner Minshew pass that Taylor was able to pick off. On the negative side, Taylor also got caught by speedy running back Jason Huntley on both a wheel route and a simple throw in the flat in which it seemed like the speedy Taylor misjudged Huntley’s own stopwatch prowess.

Taylor’s story is well-known by now, getting a late start to the game due to his Seventh-Day Adventist faith and he arrived from Colorado as a very raw prospect with amazing athleticism.

The smart money still has Edwards, White, and Dean forming a three-man rotation in the base nickel defense with Taylor serving as quality depth and a core special-teamer for Michael Clay.

But put an asterisk next to Taylor’s name. If things do ever click for the Mississippi native, he still is the most physically gifted LB in Nick Rallis’ room even with the additions of Dean and White.

“I haven’t been thinking about what my role is going to be when the season starts,” Taylor said. “I feel like that’s going to play out itself. We’re just helping each other get better as individuals.

“… You never know how the season is going to go. You have to be ready to play at any time.”