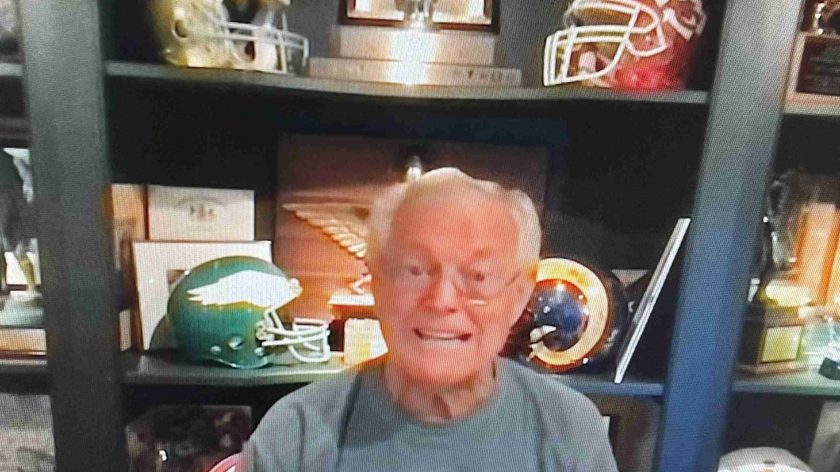 Dick Vermeil only spent seven seasons as a coach in Philadelphia. He spent much of his adult life building a connection with the Delaware Valley, however.

When the coach is officially inducted into the Pro Football Hall of Fame next month, fan bases in three cities will feel a sense of pride but Vermeil’s Eagles stint will be the headliner despite the coach winning his Super Bowl ring in St. Louis with the greatest show on turf in the late 1990s.

“I think that helped people identify with what we do and why we do it.”

Football is only a small part of the story for Vermeil when it comes to Philadelphia, though.

“The more I was around people in Philadelphia, the more I was given the opportunity to connect with them,” Vermeil said. “They are very free with their compliments. When they see you and tell you what a great job you do, as long as you don’t let it distort your ego, it’s a really warm experience.”

In many ways, Vermeil was hardly a Philly guy when he arrived fresh off a stint as the coach at UCLA capped off by a Rose Bowl win in 1976. The California native came east and won over the doubters with a work ethic that became legendary and much duplicated over the past 40-plus years.

“They liked my work-ethic approach,” Vermeil said. “At that time we were pretty structured, pretty disciplined, pretty demanding.”

The no-nonsense approach was also accompanied by winning after almost two decades of the opposite. It had been since the 1960 NFL Championship that Philadelphia could be proud of its Eagles until Vermeil turned things around culminating in the 1980 NFC Championship Game win over the hated Dallas Cowboys at Veterans Stadium.

The Eagles couldn’t quite seal the deal — losing in Super Bowl XV to the Oakland Raiders — but just getting to the big stage for the first time in the modern era was enough to turn Vermeil into a made man.

The very work ethic that fueled Vermeil’s success was ultimately his downfall as the coach cited burnout before his first retirement in 1983.

Vermeil became a star in the television booth on the college level before returning over a decade later to St. Louis. His home remained in the Philadelphia area, however, and his familiar billboard on I-95 as the spokesperson for an insurance company became a running joke as coaches came and went, some even popular but never as popular as Vermeil.

“I invested a lot of time in the community and different charities and different clubs and different companies, and got to know a lot of people that I didn’t know while I was coaching,” Vermeil said. “I was introduced to all the different levels of how people make a living in Philadelphia, other than going to NFL games. I think that helped me establish credibility.

“It takes a long time to establish credibility, maybe only a few minutes to lose it, but to establish that it takes time.”

Vermeil noted his time in Philadelphia also allowed him to figure out what to do when he returned to the NFL with the Rams, becoming more of a delegator and allowing his assistants to help him accomplish the ultimate goal, a Super Bowl XXXIV over the Tennessee Titans.

The storybook could be closed and once the punctuation was put on his Hall of Fame coaching career after a stint in Kansas City, the one-time California kid never debated where his final retirement would take him.

“I belong here. This is my community,” Vermeil said. “They respect me, they care about me. They appreciate the job that my staff and I did with their Eagles football team, and they want me to stay in the community.”