‘Business as usual’ looked different at the NovaCare Complex Tuesday 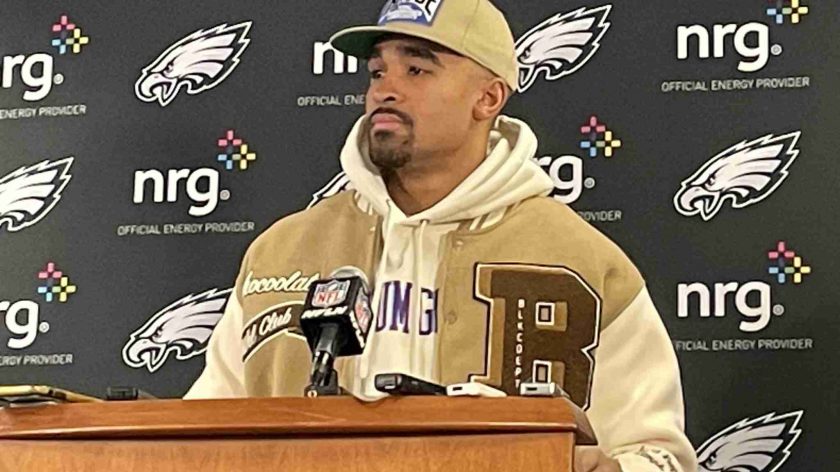 PHILADELPHIA – Jalen Hurts proclaimed it was business as usual Tuesday at the NovaCare Complex but it was anything but with a Christmas Eve showdown at 10-4 Dallas on the horizon.

Hurts did not participate in a walkthrough practice due to the sprained throwing shoulder he suffered in a 25-20 win over Chicago on Sunday and his backup, Gardner Minshew, the odds-on favorite to be the starter against the Cowboys, was excused to attend and speak at Mike Leach’s memorial service. Minshew, who was coached by Leach at Washington State, was expected back in Philadelphia on Tuesday night and is scheduled to be at Wednesday’s practice.

For one day in December, the 13-1 Eagles were piloted by third-stringer Ian Book.

Hurts told JAKIB Sports there is “definitely a chance,” he could play against the Cowboys.

“Just taking it day-by-day. Everybody knows that I’m dealing with something. I think that’s pretty public. It’s out there. I’m not one to really talk about myself,” he said. “Obviously being a quarterback for the Philadelphia Eagles you can’t run from that. But I’m taking everything one day at a time with it and preparing for a really good defense.”

Earlier head coach Nick Sirianni, a well-known proponent of the competitive advantage card, said the offensive staff would need to put two game plans in place but a team source indicated that the offense is at least proceeding like it will be Minshew on a short week.

“I don’t put anything past Jalen Hurts as far as his mental and physical toughness,” said Sirianni. “There’s a chance he could play this week. He is one of the toughest guys I know, and he heals fast. He’s a freak. His body is not like – pardon me – yours or mine. He’ll be ready to go if he can play this week, and so will Gardner.”

Hurts was injured late in the third quarter of Sunday’s when over the Bears when Chicago defensive lineman Trevis Gipson landed on the QB with his full body weight after a zone-read run.

“As a receiver, you don’t want to see your quarterback get hit,” A.J. Brown said.

Ironically, Hurts may have thrown the football better after the injury, connecting with Brown on a 68-yard explosive play that essentially sealed the game.

“Sometimes you like to see a slide, but that’s the way he plays,” Brown said. “I can’t say he needs to do this, he needs to do that. It’s worked this long. It was kind of like a freak accident.”

“It took a lot of grit,” Hurts said of staying in the game. “It took some courage and it took the people around me. When you’re in a situation like that, we have a ton of guys who play through things. We have a ton of guys who have to overcome adversity and obstacles in front of them, and I think that was something we did together.”

Moving forward Hurts wants to play but ultimately knows that decision is out of his hands. The third-year QB preaches to control what he can control and that means attacking his rehab right now.

“Ultimately, I want to do what’s best for the team,” the QB said. “It’s a thing where you take it one day at a time. I think the best thing for me is being ready to play and being of best health and that’s a day-by-day thing.”