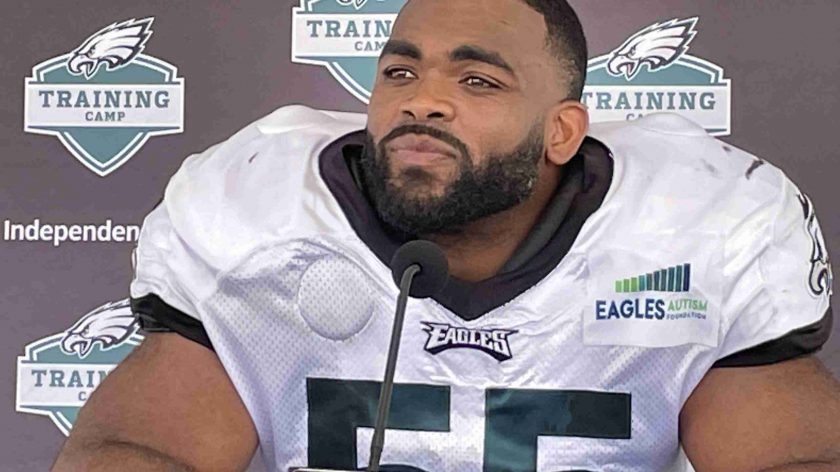 As training camp approaches, Graham highlighted how the 2022 team feels special and holds the potential to make another Super Bowl run. The addition of new game-changing names alongside Graham has created a new level of confidence overall for the team.

There is plenty to be excited about with the new weapons added to both sides of the ball. When it comes to offense, A.J. Brown has become a major focus. He had been showing out at OTA’s and demonstrating that he will be a major difference-maker this season for Nick Sirianni’s squad.

“That boy look like he going to be bullying people this year,” said Graham.

As for the defensive acquisitions, Graham made sure to provide the proper praise and respect for the playmakers. Whether it came to talking about the strong Darius Slay and James Bradberry duo at cornerback, high-energy linebacker Kyzir White alongside rookie standout Nakobe Dean, or his fellow edge rushers like Haason Reddick and Josh Sweat, or “Sweaty J” as Graham stated.

Graham made sure to highlight the big man Jordan Davis on the impact that he has shown and how he will be a force to be reckoned with.

“That boy Jordan [Davis] is as advertised,” said Graham. “[Davis] don’t even know how strong he really is.”

While this Eagles team has plenty of depth at numerous positions, the added weapons on the defensive line could prove to be an issue for Graham to get enough valuable snaps. Nevertheless, the Philadelphia veteran remains humble and understands the situation. Graham realizes that his snap count might decrease, but he just wants to help Philadelphia win, regardless of playing time.

Graham is entering his 13th season which is also his final year on his contract with Philadelphia. Although the Eagles might not re-sign him, Graham still plans on continuing his NFL career, even if it’s with another team.

“The kids are together right now and settled, so I know that they would be able to get up and leave right away,” said Graham.

Focusing on his family and remaining close has become a major priority for Graham. If he were to sign with another team, a long-term deal would likely be out of the question.

Regardless, Graham continues to focus on the upcoming season rather than a new contract or retirement. There are high hopes because there is a different feeling about this team, but only time will tell.

“I’m so thankful to get that one [Super Bowl win],” said Graham. “I’m hoping to get this next one [championship] because this team is already looking special.”