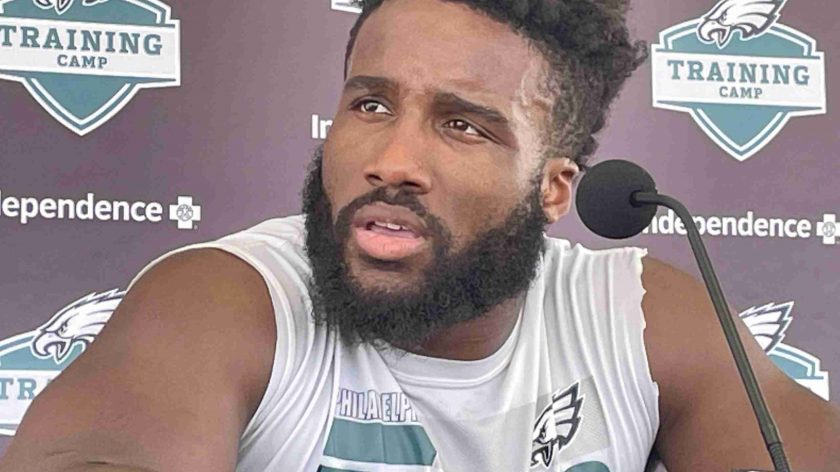 PHILADELPHIA – Boston and New York have a natural rivalry but this isn’t about the Red Soz and the Yankees where the former was once kindling to the latter’s fire.

The BoSox have won plenty over the past number of years and another Boston had made New York quiver in recent years.

For the Eagles’ Boston Scott, Giants Week No. 3 is hardly an inconvenience.

The Eagles’ RB2 has owned New York over the past few seasons with 10 of his 17 career touchdowns coming against “Big Blue.”

“I feel God has a sense of humor and why the heck is one of the smallest players having those types of games against a team called the Giants,” the 5-foot-6 Scott smiled. “It’s amazing what a little faith will do. We all have Giants in our lives and it’s different for each person.”

The top-seeded Eagles have already topped the Giants twice this season and will try to make it a three-game sweep during Saturday night’s divisional-round playoff game.

Three-for-three is also on the table for Scott, who scored a touchdown in each previous game against the Giants this season. He cashed in with a 3-yard run in a 48-22 win on Dec. 11 then an 8-yard scamper in the rematch on Jan. 8, a 22-16 Eagles victory.

“It’s playoff football, man, that’s what I’m excited about,” said Scott. “It’s a blessing to get to this point of the season. We put in a lot of work, and we want it for the guys who have been here for a long time, vets who put the foundation in place.”

While it might not seem that way with the Giants in teh schedule, Scott, 27, remains a role player for Philadelphia as the complement to starter Miles Sanders and third-down and hurry-up back Kenny Gainwell.

There is little doubt, however, that the Eagles coaching staff had consistently tried to tap into Scott’s mojo against the NYG.

“I know I’m not the most talented guy, but I feel like I am skilled,” said Scott. “So, working toward getting reps, repetitions that allow me to elevate my game. Those reps for me are invaluable, it leads to more opportunity.”

Originally drafted by New Orleans in the sixth round out of Louisiana Tech in 2018, Scott was signed off the NOLA practice squad in December of his rookie season and has since developed into a valuable contributor with 1,209 yards rushing and another 514 receiving out of the backfield in 60 games.

This season Scott also calmed down the Eagles’ kickoff return situation after Quez Watkins and Britain Covey failed to seize opportunities, returning 15 for 406 yards, an impressive 27.1 yards per return with a career-long 66-yard er.

A pending free agent, this might be Scott’s last opportunity to live up to his Giants-killer nickname but it’s much bigger than that for him.

“To get a chance to compete for the pinnacle of NFL football, that’s what really excited me the most,” he said. “We have a good opponent coming in. It doesn’t really matter who it is.