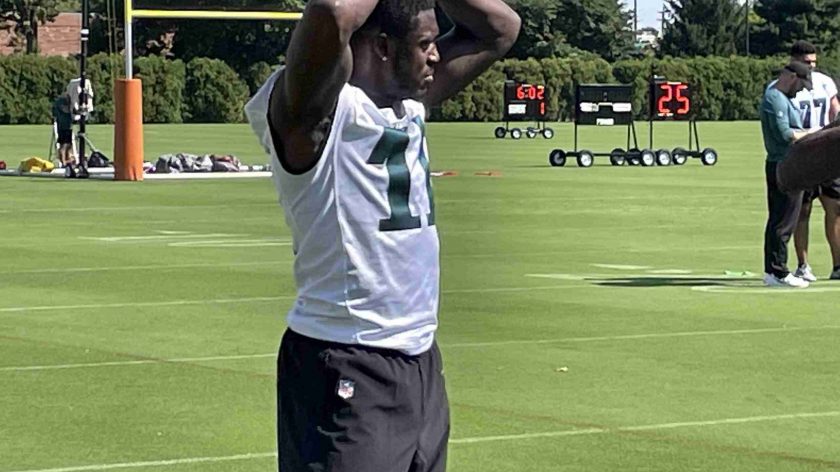 PHILADELPHIA – Eagles’ star receiver A.J. Brown got a bit of a scare at practice Friday when a rogue bee decided the lengthy wideout used to getting targets would be targeted.

Brown noted that he was stung before the session during a social media post that has since been deleted. Typically that’s a nuisance issue but Brown is allergic and needed to receive an EpiPen shot.

Brown got a late start to the stretching portion of the session in an effort to regulate his breathing after the shot. He was spotted in the locker room after practice and noted that he was fine.

Aaron Moorehead checking in with @1kalwaysopen_ post-bee sting. A separate bee did a cameo on a live spot with myself and @kracze but we escaped pic.twitter.com/s1OtUPLnqx

Brown was not added to the team’s Friday status report and is a full go for Sunday’s game in Detroit. Meanwhile, DE Derek Barnett (ribs), DT Javon Hargrave (toe), RB Miles Sanders (hamstring), and DB Josiah Scott (hamstring) were all full participants Friday and are cleared for the opener.

Brown is set to make his Eagles’ debut against the Detroit Lions on Sunday. The star receiver was acquired during the first round of the 2022 NFL Draft back in April when Philadelphia sent first and third-round picks to the Tennessee Titans before signing Brown to a four-year, $100 million extension.

The Eagles have held two (or three) positions close to the vest in advance of Week 1. Both kick and punt returner are up for grabs in the wake of Jalen Reagor’s trade to Minnesota with the betting favorite for both jobs being undrafted rookie Britain Covey, who will need to either be elevated from the practice squad or added to the 53-man roster for the game. WR3 Quez Watkins, and RBs Kenny Gainwell and Boston Scott are also potential options.

As for backup LT, offensive line coach Jeff Stoutland noted earlier this week that it’s time for third-year man Jack Driscoll to become the super sub on the line.

“I think Jack is at the point where he can be that kind of player.”

“Sills played center at West Virginia, he played tackle, he played guard, he played every position,” said Stoutland. “I didn’t know he could play tackle. When I put him in there, I was like, wow, this guy can get this done. From watching the technique, the way he takes coaching, understands what I’m teaching, so when you can create value for yourself in the organization by being able to play multiple positions if you’re not a starter.””