Are Eagles still going to play ground-and-pound in 2022? 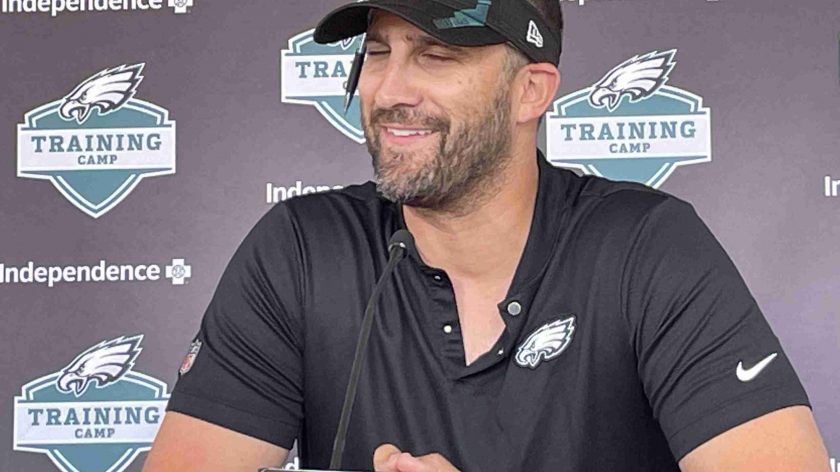 Nick Sirianni saved the Eagles’ season last year with a gutsy late-October decision to shake up his offense.

After a 33-22 road loss to the Raiders dropped the Eagles to 2-5, Sirianni decided they were going to run the ball more. A lot more.

In their first seven games, the Eagles had averaged 36.7 pass plays and just 23.4 run plays per game. Their 38.9 run-play percentage was the second lowest in the league.

In the 10 games after they switched to a ground-and-pound mentality, the Eagles averaged a league-high 38.6 rushing attempts per game. Their run-play percentage in those 10 games: 60.6. Just one other team in the league – the Patriots – had a run percentage (51.6) above 50 in the final 10 games.

The strategy worked beautifully. It helped that the caliber of competition wasn’t as good in the second half of the season. Nevertheless, the Eagles won seven of their final 10 games and made the playoffs in Sirianni’s first year on the job. Their scoring average jumped from 22.7 points per game in the first seven games to 28.5 over the next 10.

The decision to run the ball more didn’t just benefit the offense. It also benefitted Jonathan Gannon’s defense. Their snaps-per-game average dropped from 67.4 in the first seven games to 60.4 in the next 10.

Their points-allowed average improved from 26.4 in the first seven games to 20.0 in the next 10. Take out the 51 points the backups gave up to the Cowboys in that meaningless Week 18 game and the average drops to 16.5.

What will be the Eagles’ offensive plan this season? Well, with the addition of A.J. Brown and the expected improvement of Jalen Hurts, it’s not likely the Eagles will run the ball near as much as they did during their 7-3 finish last year. It’s also not likely they’ll run it as little as they did in the first seven games. Look for Sirianni to find a happy middle ground between a 38.9 run-play percentage and a 60.6 one.

Then again, they open with the Lions Sunday, which was the first team they played last year after deciding to switch to a three-yards-and-a -cloud-of-dust mentality.

With the shift to a run-based offense in the final 10 games, the Eagles played a lot more two- and three-tight end sets.

Overall last year, the Eagles used 11-personnel 63.8 percent of the time and 12- and 13-personnel a combined 34.5 percent. In 2020 under Doug Pederson, the personnel grouping numbers were fairly similar.

Jalen Hurts’ passing numbers weren’t very good last season. He finished 22nd in the league in passing (87.2), was tied for 23rd in touchdown passes (16) and was 26th in completion percentage (61.3). All of those numbers absolutely need to improve this season or the Eagles likely will be looking for a new quarterback in the offseason.

But the value of his running ability in the Eagles’ second-half resurrection in 2021 was immeasurable. Without it, they don’t make the playoffs.

Hurts finished 22nd in the league in rushing with 784 yards. That was the most by any quarterback in the league. He finished seventh in rushing first downs with 56. Twenty-two of those 56 came on third down, which was a big reason why the Eagles finished fourth in third-down efficiency (45.7).

Hurts had 139 rushing attempts in 15 games last year. That was the most carries by any quarterback. Lamar Jackson had 133 carries in 12 games. Josh Allen had 122 in 17 games.

Hurts missed two games, one with injury (Week 14 v. Jets, ankle) and the other, the final regular-season game against the Cowboys, because the Eagles already had clinched the final playoff spot.

The two areas that Hurts needs to improve the most as a passer this season is third down and the red zone. He was 23rd in third-down passing with an 81.3 rating. He finished 30th in third-down completion percentage (54.2). Twelve of his 26 sacks were on third down.

The Eagles finished eighth in red zone touchdown percentage last season (62.9). But their run game, including Hurts, was responsible for much of that. However, Hurts threw just four red-zone touchdown passes in his last eight regular-season starts.

–Quez Watkins and DeVonta Smith led the Eagles in third-down receptions last season. Both had 16 catches. Forty-three players had more, including the Vikings Justin Jefferson, who had a league-high 36.

–Smith and Greg Ward led the Eagles in red-zone touchdowns last year. Each had three. Dallas Goedert and Zach Ertz each had two. Four other players, including offensive tackle Lane Johnson, had one.

–The Eagles defense needs to be more effective against tight ends this season. Last year, opposing tight ends were targeted 133 times and had 102 catches for 999 yards and 13 touchdowns. Four of those 13 TDs were by the Cowboys’ Dalton Schultz.

Six times last season, opponents scored on both their first and second possession. Ironically, the Eagles managed to win three of those six games.