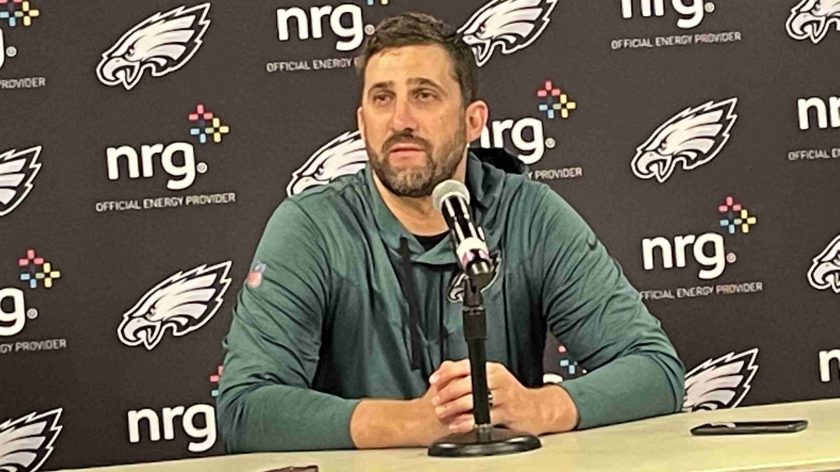 HOUSTON – An afterthought turned to perseverance as the Eagles outlasted a competitive Houston Texans team, 29-17, on Thursday night to reach 8-0 for the first time in its nearly 90 years of franchise history.

What greeted Philadelphia in South Texas wasn’t a road apple but the upset-minded Texans (1-6-1) who were competitive into the third quarter before a Davis Mills mistake turned the tide in a negative direction for a team with a very small margin for error.

The playmaking Chauncey Gardner-Johnson made a brilliant interception of an errant Mills throw, his league-leading fifth pick of the season, in what turned out to be the momentum swing the Eagles needed. The pick and a 25-yard return by CGJ set up Jalen Hurts and Co. at the Houston 17-yard line and the Eagles quickly cashed in with a 17-yeard Hurts to A.J. Brown touchdown pass to make it 21-14.

“To guy have a guy (like Gardner-Johson) who’s a ball-hawk back there, in addition to other guys who are ball-hawks, with our corners, man, that’s huge,” coach Nick Sirianni said. “You can shift a game at any time. That shifted the game. That catch shifted the game and our momentum. It wasn’t an easy catch.”

“He had a huge interception at a critical moment in the game,” cornerback James Bradberry, who also had an INT, said of CGJ. “We definitely needed some momentum. He’s been doing that for us. Last week he ended the game, this week he got us a big play when we needed it. He’s meant a lot to our defense.”

The Texans, though, were the first team this season to reach the second half without facing a deficit due to an impressive running game led by rookie Dameon Pierce, who gashed the Jordan Davis-less front for 139 yards on 27 carries.

Hurts, playing in his hometown for the first time as an NFL player, threw 243 yards and a 128.9 passer rating.

“I’m not going to make excuses about anything, or the short week. We have a standard of play, and we want to play to that at all times. So it’s a learning experience for us. It’s a formative experience that’ll only build us up.”