A triple threat with a box of popcorn, Jalen Hurts just keeps winning 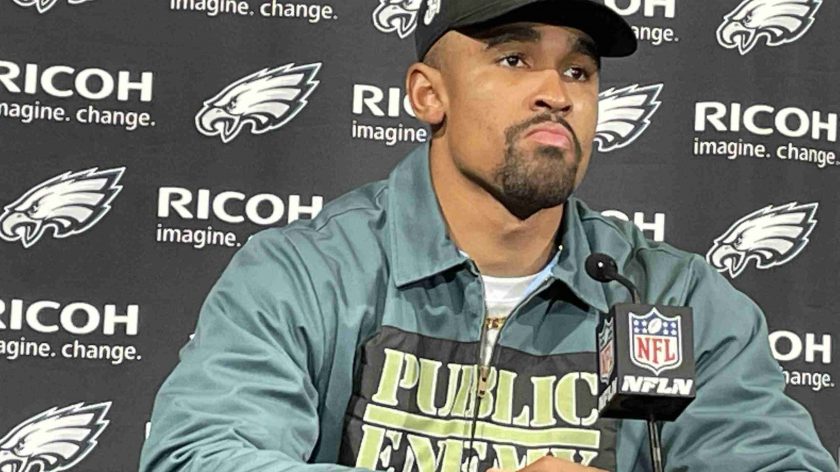 PHILADELPHIA – Jalen Hurts is labeled by most as one of the NFL’s best dual-threat quarterbacks.

After leading the Eagles to a 35-13 blowout win over Pittsburgh why stop there?

Philadelphia is 7-0 for only the second time in franchise history with Hurts as the on-field leader and the team has won 10 consecutive starts with the third-year QB piloting things dating back to last season, a franchise record for an organization that has been around for a while (1933 to be exact).

On Sunday, Hurts threw for a career-high four touchdown passes, three to A.J. Brown and all over 27 yards.

The dual-threat has turned into a triple threat, according to Hurts himself.

“I think it’s about being able to be a threat in many different ways,” he said. “That’s something that a guy like me has the ability to do. Naturally being able to run, we’ll call it a dual-threat but I like to call it a triple-threat.”

Along with the ability to run and throw, Hurts takes pride in his ability to put the Eagles’ offense in the best position on a down-by-down basis.

The Eagles have now run with Hurts stressing the defense in all three ways depending on the opponent and how the coaching staff wants to attack.

Against the Steelers, it was the Hurts and Brown show, with the latter putting up career-highs of 156 receiving yards and three TDs.

“I think we just wanna be great,” Brown said of his close friend dating back to when the two met during a recruiting trip. “Someone I call a friend. He knows what I want to accomplish, and I know what he wants to accomplish. When you’re playing for somebody you love, that you call a family, it’s a different meaning behind it.

“I know I can’t let him down, you know what I’m saying? We just having fun and playing for one another. I’m pretty sure he knows I got his back, and I know he’s got mine.”

The addition of Brown to a receiving corps that already included DeVonta Smith and star tight end Dallas Goedert has buoyed Hurts’ confidence.

“I’ve seen all of these guys do amazing things,” said Hurts. “I’ve seen (Smith) do crazy things in college. I’ve seen A.J. as a friend and as a fan take slants 70 yards. I’ve seen (Goedert) make the craziest catches in the game and in practice. So when I see them make those plays in the game, better yet when I’m playing with them in the game I’m like, I got my popcorn ready after I throw them the ball.”