A triple-threat QB; Jalen Hurts frustrates the Giants and his critics 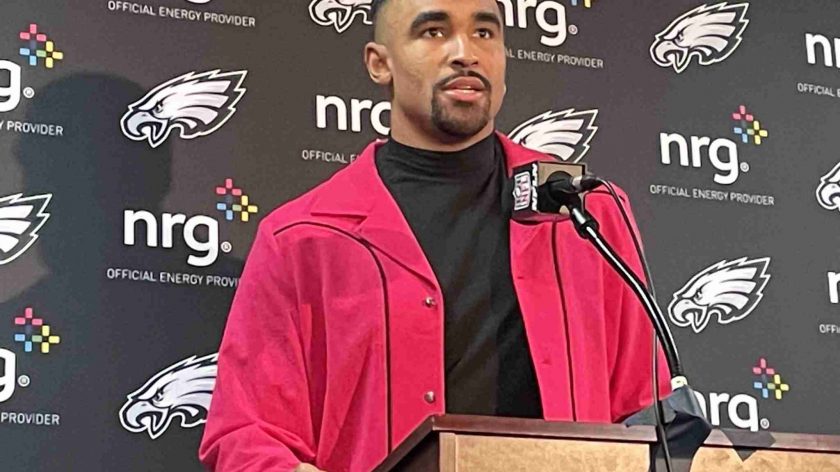 EAST RUTHERFORD, N.J. – On the same week Jalen Hurts called himself emotionless he finished it by dropping the Terminator persona for a few seconds after Sunday’s 48-22 rout over the New York Giants in which the MVP candidate threw for 217 yards and two touchdowns while adding another 77 yards on the ground, and another score.

Hurts’ rushing TD was his 10th of the season, the second consecutive time he’s done that and the first time any QB in the history of the NFL has found the end zone on the ground 10 or more times in back-to-back seasons.

For the most part, Hurts was keeping the main thing the main thing and inserting his daily deposits against the hapless Giants as the Eagles extended to 12-1 and became the first team to clinch a postseason berth this season. The guard came down at one point, however, when the star signal caller was asked about detractors who seemingly get slapped in the face by the third-year quarterback’s dominance each week but still claim he’s not the equal of others who entered the league with better pedigrees.

“There was a point in time where people said I couldn’t throw the deep ball, that I could only throw it five yards,” Hurts said before adding “I carry my scars with me everywhere I go.

Hurts then came as close as he ever has to lobbing an insult at his detractors.

Perhaps at that point Hurts pictured Nick Saban and caught himself before retreating to the Crash Davis cook of cliches.

“Everybody and their opinion don’t deposit at the bank,” said Hurts. “I just try to stay true to myself, stay true to my teammates and chase my growth alongside them.”

Hurts is one of the NFL’s leading MVP candidates with the league’s best passer rating (108.4) with 32 touchdowns (a career-high 22 through the air and matching his career-high with 10 on the ground with four regular-season games still left to play).

Everything about Hurts’ game has been elevated after an offseason of daily deposits producing what the QB himself calls a triple-threat QB. The passing and running acumen is obvious but the real leap in the third-year QB’s game has come with decision-making.

On the team’s second possession, Nick Sirianni got aggressive on fourth-and-seven from the New York 41. Hurts saw something he liked and checked to DeVonta Smith on a deep ball for a TD, dropping in the bucket between the cornerback trailing Smith and safety Julian Love racing over to help.

“It was a great (presnap) check by the quarterback, seeing something he liked, checking to that play, and executing it,” Smith explained.

What Hurts saw was an opportunity. The Eagles’ coaches had drilled into him all week how big of an advantage Smith and A.J. Brown had against the NYG corners.

“Man (coverage),” Smith smiled when asked why Hurts checked to the throw.

The passing acumen was flashed by a simple out to Quez Watkins earlier in the same drive, something Pro Bowl CB Darius Slay saw from a distance.

“The best pass I ever saw him throw was on the out-route to Quez on the blitz, off the back foot, and before (Watkins) came out of the break, it was like a dot,” the always energetic Slay said. “… That’s how you do it in ‘(Madden) 2K’ where you throw it into the corner. A dot. He hit a dot today.”

The TD run came from 10 yards out on a QB draw late in the third quarter to set Hurts’ latest historical standard.

“He was just in complete control there,” Sirianni said. “… It was just really good quarterback play by Jalen.”

So good, maybe even the sheep can acknowledge it.