A More Comfortable DeVonta Smith is Ready for a Big Season 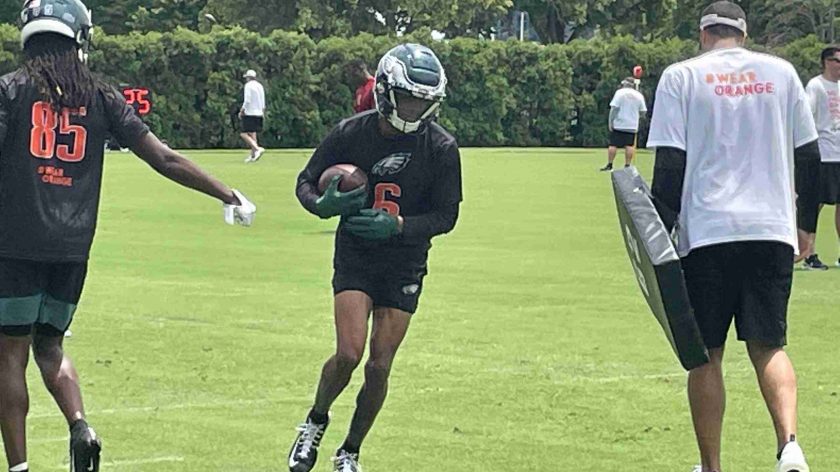 PHILADELPHIA – As the more proven commodity, A.J. Brown expects to get the lion’s share of attention from opposing defenses this season when it comes to the Eagles’ passing game but the new WR1 also offered up a bit of a caution flag to coordinators circling his impressive 6-foot-1, 226-pound frame.

According to Brown, there are two No. 1’s in Philly.

“In my opinion, Smitty [DeVonta Smith] is a No. 1 wide receiver, and he’s going against a cornerback number two,” Brown explained. “I expect Smitty to dominate, you know?”

Brown, acquired on draft night from Tennessee Titans for picks Nos 18 and 101, has already had two 1,000-yard seasons over his first three NFL campaigns and is excited thinking about the complementary nature that should develop between himself and Smith, the second-year wideout coming off a franchise rookie record of 916 receiving yards in 2021.

“Just taking the pressure off of each other … and you can’t really double [team]. It’s great having another great receiver beside you,” Brown said.

Smith, the 2020 Heisman Trophy winner at Alabama, looks primed for a breakout year in his second professional season even with Brown now on board.

At the Eagles’ first OTA practice open to the media last week it was Smith who got behind the defense on two occasions during 7-on-7 work to haul in deep throws from Jalen Hurts.

Smith followed that by further immersing himself in the community with a charity softball game at Coca-Cola Park in Allentown on Saturday and Brown was one of the participants and won the home run derby as a bit of a ringer (Brown was once a 2016 draft pick of the San Diego Padres).

Pro Bowl cornerback Darius Slay was the one victimized by Smith on the practice field and the two have developed a close relationship that often inspires the entire team with its playfulness.

“Every day is a rivalry,” Slay told JAKIB Sports. “I’m out here trying to whoop their ass every day. Like I said, it’s a battle. That’s why we practice, to get each other better. … we just bet it all the time, make it competitive. We like the pressure. It’s fun. I like doing it because it makes us better as a team and as a unit. And it builds chemistry, man. That’s one thing Coach [Nick Sirianni] is about. He loves us having chemistry. He’s loving us being close together, being friends.”

Slay has been a great teammate since arriving in Philadelphia before the 2020 season and he’s paid special attention to Smith as a young player with a massive upside.

“Like I always tell him, in college, man, you’re the Heisman Trophy [winner]. He was better than everybody out there,” Slay noted. “In the league, there’s no separation when it comes to talent. It’s about who does the best technique at the end of the day. So I just told him, make everything look the same and make sure you just be a good player, consistent. And he does that very well right now.

“Definitely going against me and all the other guys out here, our goal is to make him one of the best in the game, and he strives to be that. We’ll continue to keep working each other and get him better.”

Still just 23, Smith is also becoming more comfortable in his own skin as a young leader on the team.

Smith, along with Slay, Brown, and Hurts, was among a group of core players Jeffrey Lurie took up to Boston to see a Celtics playoff game (yes, sorry Eagles fans, your owner remains a diehard C’s devotee).

“Shoutout to Mr. Lurie for doing that for us,” Slay said. “It was a blessing. I got to hang with some teammates again. Building bonds. Like I said, coach is real big on bonding. And that’s something we do real well as a team and as a unit here.”

The softball game was another example of that with Smith captaining a team filled with Eagles against one led by Dallas Cowboys star linebacker Micah Parsons.

“[Chemistry is] a big part of it,” Smith told NJ.com’s Chris Franklin. “Everybody is coming together to become a family. If you don’t have that connection with your teammates, that can mess up everything on the field. The better the connection you have off the field, the better it is on the field.”

-John McMullen covers the Eagles and the NFL for JAKIB Sports