A hurting Jalen Hurts to the rescue 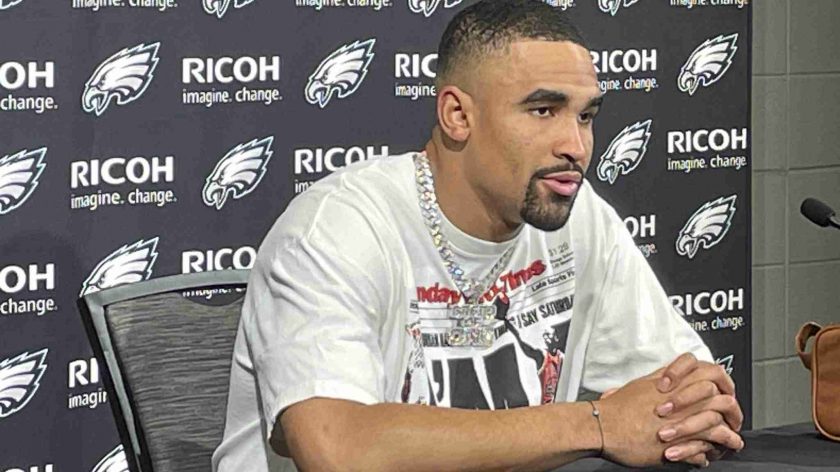 PHILADELPHIA – Jalen Hurts came to the Eagles’ rescue in a 22-16 win over the junior varsity of the New York Giants but what cost?

Philadelphia’s QB1 fight through significant soreness because the Eagles were unable to win without him in the two previous weeks.

With the MVP candidate, Philadelphia is now 14-1. Without Hurts, the Eagles are 0-2.

Typically Sirianni is very guarded when it comes to injuries but dropped the facade here.

The plan was to protect Hurts as much as possible from both a game plan perspective and a personal acknowledgment from the player himself.

Hurts threw for 229 yards and ran for only 13, something New York picked up on into the game when it became clear pulling the football in the zone-read game was off the table.

“I think he did a great job for what they asked,” receiver A.J. Brown said. “They really weren’t trying to put him in tough situations, and I felt like he handled that pretty well, and it was good to see him back out there, to knock some of the rust off, and get a game under his belt before the playoffs.”

The typical explosiveness of the Eagles’ offense was missing but the result was the same when Hurts is out there — a W that in this case produced NFC East champion hats and T-shirts, the No. 1 seed in the conference, and a franchise-record 14th win.

“We played a lot of football together. So, there’s a lot of familiarity,” Pro Bowl center Jason Kelce said of Hurts. “He’s a very driven competitor. So, you’re always going to feel it from that guy. He’s been like that from his rookie year. He’s a fun guy to play football with. He’s a natural competitor in the fullest sense. I think you feel all of that stuff.”

As far as the shoulder and the future with it, Hurts simply replied “good enough.”

“… I think everything happens the way it’s supposed to. I was pushing myself to be available, and it wasn’t an easy thing. It wasn’t easy; it’s still not easy. But we’re here, we’re thankful, and we’re looking forward to what’s to come.”