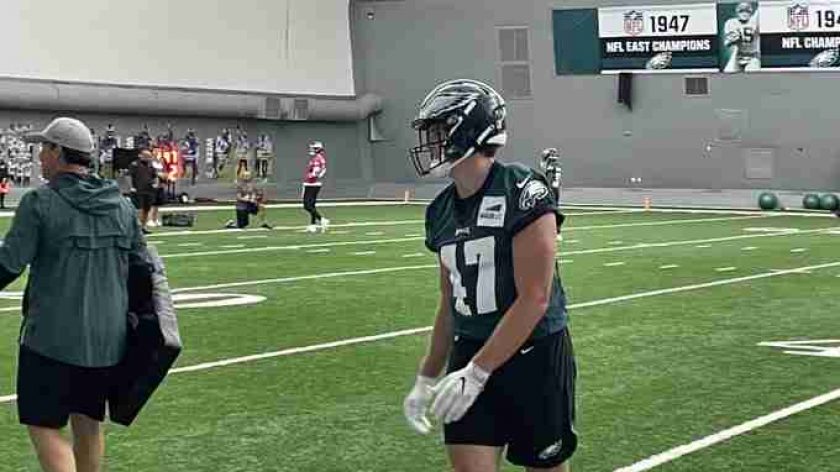 There is plenty of context to that sentiment starting with the realization that Philadelphia has no proven option behind Pro Bowl-level starter Dallas Goedert and Calcaterra arrived in Philly from SMU via Oklahoma with the skill set of a Day 2 pick, at least from a receiving standpoint.

Once a rising star with the Sooners, Calcaterra decided to retire from the game, however, after a series of concussions sparked internal debate about his cognitive future. The Los Angeles native’s cost-benefit analysis at the time pointed toward his long-term health.

In his time away from the game Calcaterra pursued a number of altruistic endeavors like firefighting and emergency care, but ‘ball remained his first love and, as he got better educated on concussions, Calcaterra realized he succumbed to an alarmist mindset.

“I wouldn’t say I was in a scary place,” said Calcaterra. “I just made a decision based on my knowledge at the time. …I didn’t have a lot of knowledge about concussions.”

In hindsight, Calcaterra now understands he read the headlines but didn’t dive into the underlying data.

“We all know the sigma about head injuries in football and so with the limited knowledge I had, I was just like ‘I’m gonna stop playing,’” he said. “I prided myself on a good career at Oklahoma and I was just ready to move on.”

From the moment Calcaterra moved on, however, he realized he was looking back.

It’s not exactly Bruce Springsteen-like “Glory Days” regret for someone in their early 20s, however. Calcaterra had plenty of time to restart from what he felt was the wrong decision.

“I have so much passion for football,” he said. “It’s all I’ve ever done since I was a kid. It’s all I ever wanted to be is a football player and so that whole year I wasn’t playing, that’s all I could think about.”

Calcaterra made the decision to return to college football when watching the 2020 NFL Draft.

“The most pivotal moment when I was like ‘alright I gotta give this thing a shot.’ Like I know I’m good enough. I know I can do it. After [that draft] I guess I just focused more on it,” Calcaterra explained. “Started to try to get back into football shape, to my playing size and things like that so it was just when I started taking bigger steps to come back to play.”

The real impetus behind the return, though, was the concrete opinion of Dr. Michael “Micky” Collins, an internationally renowned expert in sports-related concussions based in Pittsburgh.

“He’s a highly-respected guy in the industry so I went and saw him a couple times,” Calcaterra said. “He led me to be a lot more comfortable with me coming back to play. Reassured me that there’s a lot of guys who play football who have head injuries like me or even more severe.

“My cases are really minor so he gave me some reassurance.”

The green light was there and Calcaterra took it, first plotting out his return in the SEC at Auburn before making the decision on SMU where he was good enough to get back on the NFL’s radar.

The Eagles took the dive at No. 198 overall, another sign for Calcaterra who modeled his game after former Philadelphia Pro Bowl tight end Zach Ertz.

The next stop is opportunity in August and the early returns have Calcaterra and second-year player Jack Stoll, the odds-on favorites to be the backup TEs in Philadelphia.

If Sirianni and offensive coordinator Shane Steichen want more of a blocking mindset in 12 personnel the default will likely be Stoll, who proved to be capable in-line after arriving last season as an undrafted rookie out of Nebraska. If the goal is stress on the defense from a passing perspective, Calcaterrra should have the leg up.

Nothing is assured, of course. However things shake out, though, Calcaterra believes he won’t be limited by prior head injuries.

“I went through all of last season [at SMU] with no issues at all, taking hits, and all that concussion stuff is almost three years ago now,” Calcaterra said. “In my opinion, in my mind, that’s in the past and I’ve played a full year healthy and I’m ready to be playing just like everybody else.”

“Once we go through the medical meetings, and we have a lot of faith in our medical staff. They are the experts in that. They passed him,” Roseman said of Calcaterra. “… There were no medical concerns for us on Grant, and I think we just kind of say at the end of the day when there is a ‘P’ in front of a guy’s name and he passes, that’s all we need to know, and we go.”